News circulated online regarding the incident involving a Filipina domestic helper. It is said that the Filipina stabbed two children who were supposed to be her wards.

However, the Filipina was rescued and currently confined at the Al Khafji General Hospital where she is in a comatose state.

The 14-year-old, oldest among the two, was already sent home following operations to mend wounds on the face, hands, head, and feet. The 7-year-old victim, meanwhile, is still confined in the hospital because an operation still needs to be done to the child, one in the feet, shoulders, and throat. The nose of the child was also broken and wounds were all over the child’s face.

The mother of the children also sustained wounds as she was the last person that the Filipina attacked before she went to her room to try to end her own life.

Al-Anizi also confirmed that there are no money issues involved as the salary of the Filipina was given to her ahead of time. The workload of the Filipina is also not heavy as there are only four people in the residence of her employers.

“The family praises God for the survival of the two children after they were exposed to this unbelievable accident. The children need psychological treatment after this traumatic experience and they miraculously survived,” says Al-Anizi. 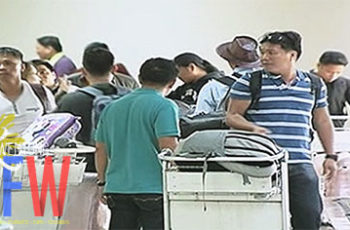