Supposed to be, Overseas Filipino Workers are the ones who should help each other in times of need whenever they are away from their homeland. However, in the case of these two domestic workers, they victimized their fellow kababayans after they got involved in a massive recruitment scam in Hong Kong.

Two Filipina were involved in a massive recruitment scam that victimized around 60 Filipinos over non-existing jobs as gardeners and domestic helpers in Hong Kong. One of the Filipina works as a domestic helper while the other is a resident. The names of these two perpetrators were constantly mentioned by the victims and it is believed that they netted at least P3 million since January.

Hong Kong’s Consul General Raly Tejada promised to look into the case together with other Philippine government agencies like Philippine Overseas Employment Agency. The Consul General is also keen in advising Filipinos to be wary of such activities in the future. According to Vargas, her friend Ruby Ariz Bote who also works as a domestic helper lured her into believing that the offers were legit. Ruby allegedly promised to process her work visa which was for her relative in the Philippines.

“As I did not have enough money, I asked my relatives in the Philippines to remit the amount to (Bote) for me. Bote then gave a name to me for the remittance: Marilyn Pascua Gregory,” says Vargas.

Most complainants also have the same recipient name which they made through Western Union. According to reports, these scammers have also hurried the sending of money because the jobs they are offering are ready.

The victims are urging these scammers to return the money because most of them only borrowed it and they are still paying for the interest.

This should play as a reminder to all aspiring OFWs – you must only transact with legitimate recruitment agencies, the ones that are licensed and regulated by government agencies in the Philippines. 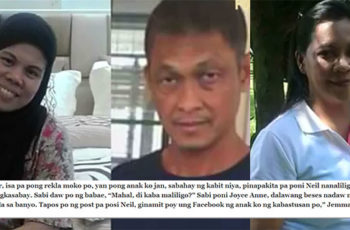