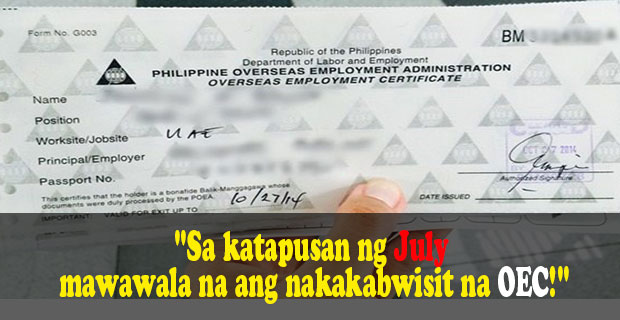 According to Uson’s Facebook page , OFWs need not secure their Overseas Employment Certificate before deployment effective end of the month of July as government will be issuing them OFW IDs instead.

The OFW IDs will be issued to all Filipino migrant workers for free.

The IDs can be claimed at POEA’s office.

An Overseas Employment Certificate  is required to be submitted by OFWs leaving the country to their employment destination.  A necessity as it may seem, others have just considered the document  unable to maximize its main purpose yet only to meant to generate revenues for the government. Spread the love     A Filipino in Hong Kong is bound over …
Tags:Exemption of OEC OEC OEC Mandatory ONLINE OEC