Seoul has deployed its warship to Libya following the recent abduction of a South Korean national together with three Filipinos.

Munmu the Great, a 4,000 tonne vessel, is on its way to Libya to secure that the abducted individuals will be releases.

The warship is set to “carry out its duty of protecting commercial vessels” and is ready for any possibilities of military support.

The four individuals were abducted while they were working on a water project site, situated in western Libya last July 6.

A video personally captured by their captors were posted on Social Media including SITE Intelligence group. The Philippine and Korean government further confirmed that the four were from their country.

In the video, it can also be seen that an armed person is guarding the four men. It is not yet confirmed when the video was captured.

“The Philippine embassy in Tripoli has confirmed that the three men in the video are the three Filipino technicians who (were) taken by armed men in Libya last month,” says Elmer Cato of the Philippine Department of Foreign Affairs spokesperson.

The Korean spokesperson also confirmed that they are doing “its utmost with all the resources the country has”.

“His country and his president have never once forgotten him,” says Kim Eui-kyeom.

“The government has been maintaining a close cooperation system with the government of Libya and other allies, such as the Philippines and the United States, since the day of the incident for his safety and release,” further added.

In the video, it can be seen that the four is deliberately asking for help.

The four foreign workers (3 Filipinos and 1 from South Korea) abducted from Man-Made River's Al-Hasawna site early in July, southwestern #Libya, plea for help in a video posted by their kidnappers.#Philippines #South_Korea #Southkorea

Posted by The Libya Observer on Wednesday, August 1, 2018 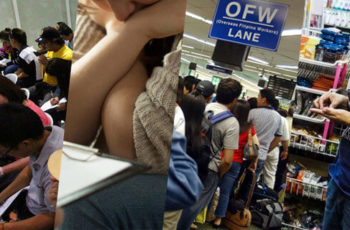 Spread the love     A group for overseas Filipino workers (OFWs) has …
Tags:filipino Filipino Abducted in Libya Libya OFW in Libya