The Overseas Workers Welfare Administration (OWWA) recently announced that OFW dependents can avail the scholarship program of the agency to somehow ride off the effects of COVID-19 in attaining their goals to finish their education.

During the public briefing of the “Laging Handa”, OWWA Administrator Hans Leo Cacdac said that they have a couple of programs that can help the families of displaced OFWs. He mentioned the “Project EASE” of OWWA which is an Educational Assistance program that does not have a deadline can still accept interested applicants, especially whose parents are displaced from their overseas jobs due to the COVID-19 pandemic.

Under the program, the agency can grant as much as P10,000 every year to a qualified student for four years. A 400-million budget has been allotted to sustain this government project. Cacdac also mentioned that the EASE program also has 400 scholars. OFW-dependents will also have to pass the qualifying exam of the Department of Science and Technology (DOST) each year

Meanwhile, it is expected that the Department of Labor and Employment’s program to provide aid to displaced OFWs, DOLE-AKAP, will resume following the President’s signing of the Bayanihan 2 Act.

“That’s the good news, the DoLE-AKAP will again receive P2-billion funding from the Bayanihan 2,” DOLE chief said. “We will have another round, or tranche of distribution to at least 200,000 DOLE-AKAP beneficiaries.” 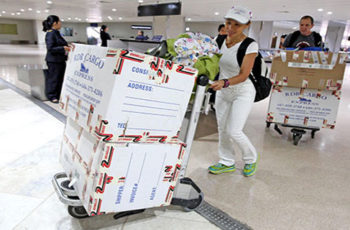 Spread the love1.6K    1.6KSharesOFW should not be worried about sending their … Spread the love     As the leading Presidential candidate in the latest …