HONG KONG – More or less 500 OFW’s working as domestic helpers were victimized by the pyramiding scheme Emgoldex. They were able to invest their hard earned money and everything were wasted.

Officer-in charge of the Assistance to National Section – Philippine Consulate General together with Attache Hermogenes Cayabyab Jr., came across with 20 domestic helpers that were clear victim of the scam.

According to the complainants, there are two Filipinos who allegedly received their invested money in Emgoldex. They were able to pay ($6,675) P36, 000 for individual investors and $1,335 for shared accounts.

The complainants were able to secure sworn affidavits which will be sent to Department of Foreign Affairs Office in the Philippines. The said issue will also be announced by the technical Working Group during their quarterly meeting so as to raise awareness to people.

During the PCG meeting, it is discussed that the Consulate is continues to remind OFW’s not to invest money especially if there are no products in exchange for their investment and the only way to earn is to hire more investors. Valespin also asked the people to stop investing their money into this kind of scheme.

Meanwhile, the two Filipino dragged in this issue were MJ and Evelin. They allegedly received the investments promising that as long as they can locate them on Facebook, they can assure that their money will never go to waste.

On the PCG meeting, MJ appeared promising that she will return the money only to those investors with encoded accounts and that the system of Emgoldex got mixed up.

MJ, who is also a domestic helper in Hong Kong allegedly received bonus amounting to P2 million, she also owns a car and a water refilling station business back in the Philippines.

The PCG asked the help of individual non-government organizations to help them facilitate the needs of affected OFWs.

Meanwhile on the report from ABS CBN last May 2015 regarding on how they are recruiting these scam.watch below 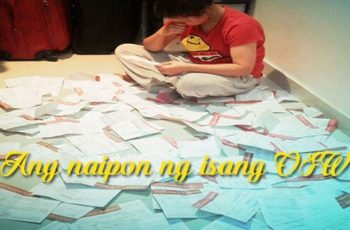