Oman is one of those countries accused by the Human Rights Watch (HRW) of doing abuse for their foreign maids which could sometimes result to slavery.

According to HRW, they were able to document such activities of both physical and sexual abuse, longer than usual working hours, confiscation of employees’ passports and worst, maids being sold to another employer. Last Wednesday, the news was widely spread out yet Omani authorities refused to respond to it.

An interview was conducted by HRW to approximately 130,000 domestic maids. It is said that atleast 59 of them confessed that the Oman law didn’t provide the accurate protection for them even when the employers abuse and mistreat them.

A New York group said that abuses in Gulf Arab Sultanate is clearly widespread yet it is taken very simply.

According to one Bangladesh maid, she was working for an employer situated in United Arab Emirates yet a new employer paid cash for her transfer in Oman. It is very clear that the Bangladesh maid was sold.

Gulf Arab Countries are following a rule or so-called, Oman’s Kafala, in which the visa of a migrant worker is inevitably tied to the current employer and they are not allowed to transfer without prior permission coming from the previous employer.

Most female domestic helpers in Oman are coming from Indonesia, Philippines, Ethiopia and South Asia. 4.4 million people in Oman are foreigners and most of them have acquired sponsorship from their employer. 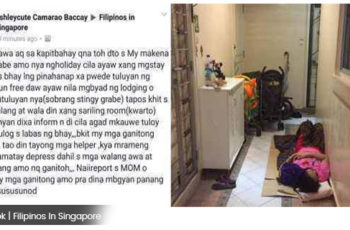