A Filipina domestic helper in Bahrain suffered too much abuse and her genitals were also mutilated by her employer.

Diplomats are already investigating the allegations of a certain Emma Balela that her genitals were mutilated by her employer. The victim already returned to his home country.

According to Emma, she was allegedly abused by her employers for five years. She was not properly fed, so salary was given to her and made to sleep together with animals.

However, the worst is yet to come. According to the poor Filipina, her female employer dared to mutilate her genitals as well as nipples, prompting her to get admitted to a hospital in Bahrain.

The entire incident was detailed by a certain Stephanie Esguerra, a passenger of the plane where Balela also rode. She found Balela crying as she waits for her flight.

According to her, Balela ran away from her employer after she got discharged from the hospital.

“After she got discharged (from the hospital) she ran away to the airport,” says Esguerra. We traveled together to Abu Dhabi, where flight attendants refused to take her (on a connecting flight to the Philippines)”.

Esguerra also said that the woman couldn’t sit throughout the entire flight and was bleeding.

“She was bleeding, despite wearing pampers, and could not sit for eight long hours. The next day I got the call from our embassy, which said she boarded a flight the following day. Our embassy said she was admitted at St Luke’s Hospital, in Manila, and was being treated.”

Esguerra hopes to spread awareness regarding the incident so she took a video of Balela at the airport and posted it on her social media account.

She said she was kept in a room with animals, but the sponsor’s sister helped her to escape,says Esguerra. “She (the employer’s sister) brought a ticket and her passport on the day she was taken to the hospital after the sponsor cut her nipples and her private parts

Balela was also very upset while waiting for her flight.

“She caught our attention in Bahrain airport, as she was crying and speaking to everybody,” said Ms. Esguerra. “She asked for help and I said I would capture her case on video and spread it in the media She told me she wanted to fight (in court) with her sponsor, in Busaiteen, to get her five years’ salary.”

Furthermore, the case of Balela is currently under investigation, as confirmed by Vice-consul Ricardo Aragon. He also knew that Balela was admitted to the hospital upon her arrival in Manila.

“The embassy was notified of the incident the same day as the woman left the country by people who saw her at the airport,” says Aragon. “We would not like to comment in detail about the case, as the matter is under investigation. The woman was met by (Philippine) Foreign Affairs Department officials in Manila and is currently being treated in a hospital.” 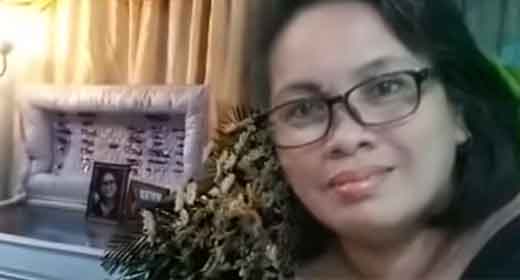