Members of the Asian Migrants Coordinating Body (AMCB) have staged a rally in Hong Kong to fight for a raise of the monthly wage of foreign domestic workers to HKD5,000 (PHP30,168) from HKD4,210 (PHP25,401).

The head of AMCB, a Filipino, said that a monthly wage of HKD5,000 to meet the daily living needs in Hong Kong. They based their computations on data from the Hong Kong government. They also called for a food allowance of at least HKD1,600 (PHP9,644) from HKD900 (PHP5,425).

They also urged the Hong Kong government to stop employers from ordering their helpers to clean windows from the outside due to the fatal fall of one Filipino helper after her employer ordered her to clean the windows.

READ ALSO : Life Of Foreign Domestic Helpers In Hong Kong During Day Off And Holidays

AMCB submitted their demands to Labor and Welfare Secretary Matthew Cheung when he talked with them in his office in the run-up to the government’s annual wage review. However, Labor officials hinted they shouldn’t expect much due to the uncertainties in the local economy. Spread the love     If an overseas Filipino worker is diagnosed with … 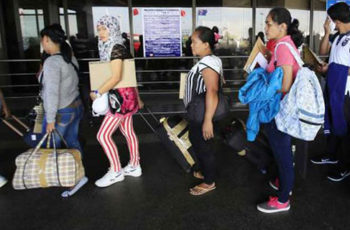